Reflecting on the Recovery

I remember where I was the second I heard the news. My husband & I were just finishing up a late lunch at a pizza place off Maple Street in West Omaha.  We had kept an eye on the storm passing over our home in Blair.  Our son and his girlfriend were at our home at the time and had taken shelter.  I called my son to make sure they were okay. After he reassured me they were fine, I asked how everything else was.  He sighed and said, “Are you ready?”  His tone indicated a list was on the way. 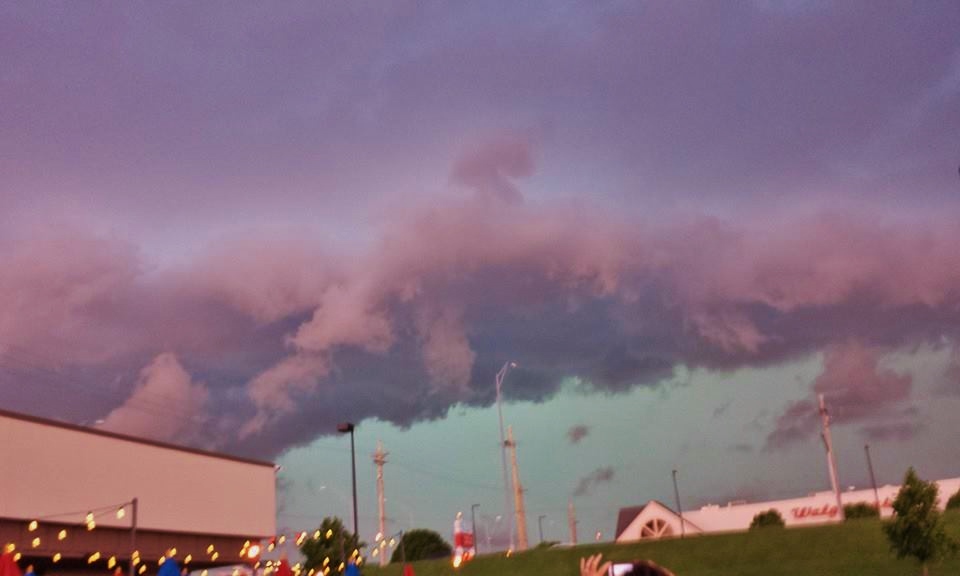 The storm as I saw it from the safety of Omaha.

I laughed, sure he was pulling my leg and said, “You’re kidding, right?”

“No,” he replied before listing off the damages.  Windows, doors, screens, siding, cars, the yard, a shed, a tree, our garden-all were extensively damaged.  I was shocked.  I was also relieved, the two most precious things in my home at the time, my son and his girlfriend, were safe.   Later, we would find that all our animals were safe, as well.  The June 3rd, 2014 hail storm was about to alter the face of Blair, Nebraska for many years to come- a storm that had lasted just about 10 minutes.

We spent the next couple hours skirting the storm and making our way to drop off our granddaughter in Fremont before returning to Blair.  The drive up HWY 31 changed abruptly between the Kennard cutoff and County Road 29.  The ground was suddenly dark green around houses, where trees were stripped bare of many of their leaves and branches.  Vehicles parked along the roadside looked like cannonballs had been lobbed at them.  There weren’t just shattered windshields, there were huge holes through the glass and dents in the bodies.  I began to cry looking at the widespread damage though-out the countryside.

Then we drove into the town of Blair.

We passed thousands of cars, hours ago worth millions, which now sat nearly totaled in car lots, interiors and computer systems soaked with rain.  Down the road, an abandoned minivan sat in a precarious situation, one of the rear wheels off the ground, inches from going completely over the edge of the creek in Rhodes Park just off Davis Drive.  I thanked God that they had managed to stop in time & prayed everyone got out safely.

I, like many other residents, walked through my home and yard, a mixture of shock, awe, gratitude and sorrow fighting their way through me.  The only possession I had that was not damaged was the car I had driven into Omaha that morning.  There were four inch deep holes in the side of my home.  The outside of my house, and that of the homes around mine, looked as though giant wild animals had raked huge claws down their sides, shredding the vinyl siding to splinters. 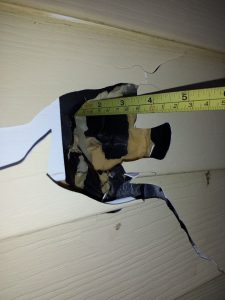 One of the 4 inch deep holes in my house from hail.

A friends house, both within 3 blocks of Crowell Home.

In the end, the loss was just things & they were all replaced, repaired or cleaned up.   This was just my personal experience.  The experience of those that care for others was vastly different from mine.  While I was able to focus on myself, my family, and my things and how my life had just changed, the staff of care facilities, like Crowell Home, had to put their own concerns on hold to care for those in their charge.  Buildings had to be made safe; hazards cleaned up, where possible; and residents moved to rooms that were free of debris and safe from the elements.   The staff also had to carry on rendering routine medical care to the residents in need of constant care.  Diabetics don’t stop needing care while you are cleaning up broken glass where hail has pierced through the windows.  In fact, some resident conditions require more care because of the stress of such events.

The storm that passed through Blair, Nebraska that day caused over a million dollar’s worth of damage to Crowell Home.  The building has since been fully repaired. The grounds have recovered.  Vehicles, windows, shutters, carpets, curtains, blinds, the roof and the buildings’ exterior sport a fresh look that belies the damage suffered just 2 years ago.  Crowell’s Board of Directors and Administrators hired contractors and companies who worked hard to return Crowell home to its pre-storm state.  Dan Sammons & his crew did a great job and always kept Crowell Home’s best interest in mind.  We are grateful to all who came to the rescue with aid and donated to the recovery effort.

Follow link below to excerpt from a special edition of "At Home" featuring storm damage photos from Crowell Home:

There is one thing that was priceless through-out the entire storm and initial recovery- one asset that couldn’t be replaced.  That is staff that was on the clock when the storm hit.  They prevented injury to those who call Crowell home.  They carried on with their day, meeting the needs of the residents. They soothed the worries of Crowell’s residents. They reassured them that “all was well” at a time when any reasonable person would understand the desire to run and check ones’ own home and family.  Many of them would tell you that they were simply doing their job that day, but what an amazing job they did.    They made the difference in the tone of the recovery even before the storm began.  They followed their training, took warnings seriously and were as ready as anyone could be when the storm hit.

As we reflect back on that day, we can’t help but feel utter, heartfelt gratitude for all our blessings.  Says Bill Willard, CFO,” We can feel for what they are going through in Canada (with the wild fires).”   Our thoughts and prayers continue to be with those experiencing such a great loss.   Our hope is they will someday be able to reflect back upon this day, as we do, with gratefulness, when once again, all is truly well.

View all posts by: Erica Bruner